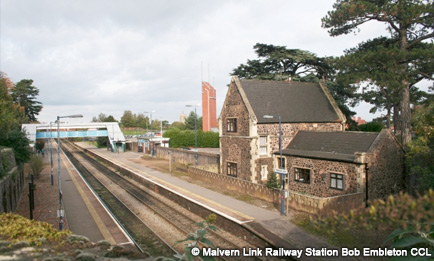 Malvern Link station serves the area of Great Malvern which is separated from the main town by Link Common, a protected area of open land.

It is in the Malvern Hills district of Worcestershire. Link refers to a ridge in the slope of the Malvern Hills on which it is situated, from the Middle English “hlinc” meaning a ridge of land. The settlement was a key site of the Romano-British pottery industry that produced Severn Valley Ware.

The station is staffed and is situated on the Cotswold Line between London and Hereford. It was opened in 1859, serving as the commercial hub for Malvern (Lady Foley didn’t want Great Malvern associated with commerce). Later, Sunday trippers from Birmingham and the Black Country came by train to enjoy the Link, and to access the Malvern Hills.

All that remains of the original station is the former station house which is now a holiday home. The current operator is WMR who run services between Hereford and the West Midlands through the station, augmented by GWR’s Hereford – London and Great Malvern to Gloucester services. 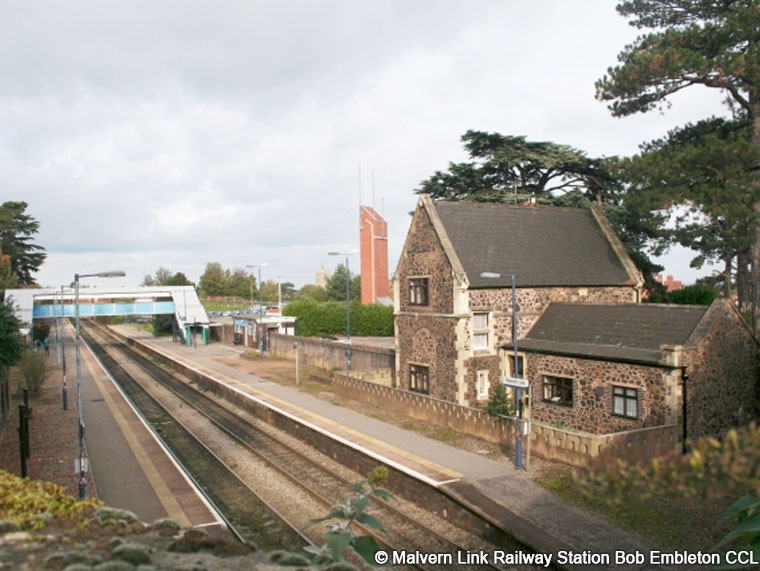 Malvern Community Forest have formally adopted the station and are members of the Community Rail Network. The Group works in partnership with the Malvern Civic Society.

The Group has planted a mini-orchard of traditional varieties of apple bred locally, and plan to plant some locally bred hops too (probably in a dwarf variety). This work recognises the station’s role as the railhead for fruit and hop pickers who came in season to work in the local orchards and hop fields. Other work undertaken includes pollinator-supporting flower beds, trees to be coppiced, wildflower meadow areas, a wild-life pond and the first of a number of different sorts of hedgerows occurring across South Worcestershire.