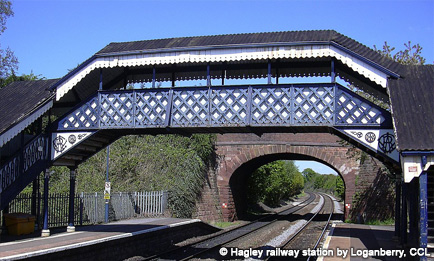 Hagley station serves the large village of Hagley in the Bromsgrove district of Worcestershire.

The origins of the settlements which now make up the village can be traced back to the Bronze and Iron Ages, with some evidence of a Roman presence (a Salt Road from Droitwich ran to the west of the current village). The village is recorded in the Domesday book. Nowadays, it is largely a dormitory village for Birmingham and the Black Country.

The station is staffed and is situated on the line from Droitwich through to the West Midlands. The station was first mentioned in public timetables in 1862, but it wasn’t until 1884 that the present building and footbridge were provided by the GWR. The footbridge is one of the few remaining of its type and is Grade II listed. Hornby used the footbridge as the basis for its OO gauge model.

The current operator is WMR who run services between Hereford and the West Midlands through the station.

Level access to available to both platforms though the path to Platform 2 starts by the Roman Catholic High School entrance well beyond the overbridge. 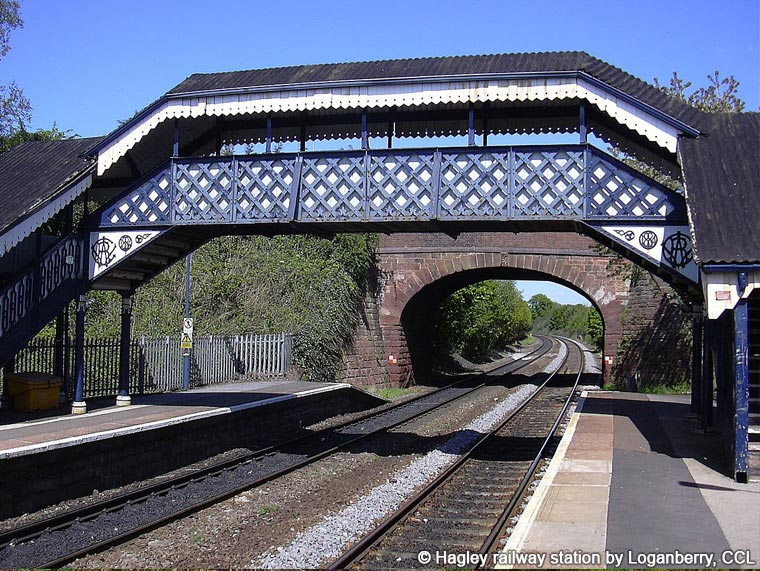 Currently the station is not adopted, though the Hagley Art Club maintain an exhibition of members’ work along the platforms. Contact has been made with Hagley Parish Council and with Hagley Catholic High School (many of the pupils of which use the station to commute to school). It has been suggested that Hagley Community Association may also be interested.

Although in Worcestershire, the station is seen as part of the West Midlands Travel to Work area. A recent Station as Places exercise by WMR and the WMRE linked Hagley with Stourbridge Junction in terms of Travel to Work planning. You can read the full Hagley Station prospectus here (PDF 2Mb) from the link.

However, the CRP representative is currently Tony Woodward of BARRUP, the Bromsgrove And Redditch Rail User Partnership.