November 2020 update: The project is completed and the resulting tapestries have been filmed for the Anniversary event.

See all 18 trains on video!

What’s the project about?

Together we are going to be creating 18 tapestry train artworks for temporary display at each of Worcestershire’s railway stations in the Autumn.

Then, all the trains will be linked together to create two massive trains – each at 11.5m long – to be exhibited in the first instance at the Worcestershire Community Rail Partnership Anniversary event in November.

We have set ourselves a bit of a challenge!

There are 300 train pieces that need stitching!  Want to help?

How much does it cost to take part?
Nothing.

It is free to take part, thanks to funding from the Community Rail Network and the WCRP.
All we will ask you to pay for is the stamp to return the work to us.

Watch a video about the project here

I have never done this before. How will I know what to do?

In the kit you will receive a pattern sheet to follow, along with stitching guides. You can also visit the Woolly Mammoth Stitch Works website to watch stitch tutorials.

What’s in the Kit?

Everything you need will be in the kit you are sent.
This includes:

Click here to watch video tutorials on the stitching

How do I get involved?

If you are age 16+, live in Worcestershire and would like to join our team of volunteer stitchers, then we would like to hear from you!

To get involved, please email train@woollymammothstitch.works
You will get an automatic response asking for a few details. Email us back with these and then you will be sent a tapestry kit in the post. 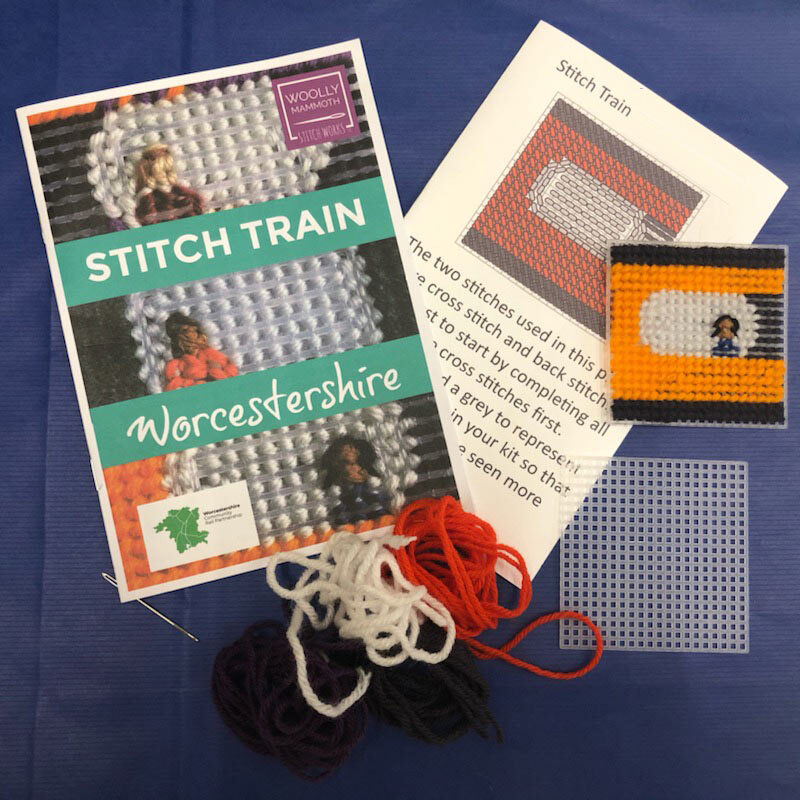 What will I be stitching?

You will be stitching either a piece of the carriage, set of doors, or the front or end piece of a train. The train designs and colours represent either the new 196 units being launched later in the year in Worcestershire by West Midlands Railway, or the latest Great Western Railway Intercity Express Trains which call at eight of the county’s stations.

We will also include additional colour wools for you to use to stitch yourself into the windows if you would like to.

Put yourself in the picture

Are there any deadlines? Yes.

If you are an existing WCRP volunteer, you will be invited to order a pack before the 31st July to guarantee you will receive one.

After that, if there are any pieces still to stitch, we will be opening up the opportunity to get involved to other people living in Worcestershire.

The deadline for sending back all the tapestry pieces is
FRIDAY 4th SEPTEMBER.

How can I stay connected?

Sharing images is a great way for our stitch team to stay connected whilst we cannot meet in person.
Please take a picture of your stitched tapestry piece for us and share it on social media if you can, using the hashtag :

Please use the hashtag #StitchTrainWorcs

If you don’t use social media, please email a picture instead to train@woollymammothstitch.works
We’ll be adding images to our online gallery as we get them so you can check on progress!

When can I see the final artworks?

We will email you to let you know when the artworks are ready to be unveiled and invite you to join us!

We will also let you know at which station your stitched piece of train will be.

WCRP may also keep in touch about other related events which you can attend too.

I have other questions. Who do I ask?

Ready to get involved?

Email train@woollymammothstitch.works to get started.

Our Partners and Sponsors 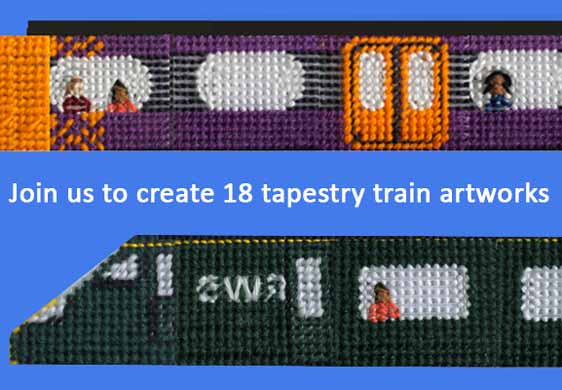